Important breakthroughs can be made in the areas of 3D photography and medical image analysis by solving open mathematical problems. In medicine, finding better ways to read images will make it possible to visualize complex phenomena that are currently poorly understood, such as how blood flows inside the brain, what happens during a heart attack or even how cancer develops or disappears. In the area of 3D photography, 3D models for individual buildings or entire areas can be developed and then used in construction, cinema, video games, virtual tourism, heritage preservation, etc. Semantically rich 3D models as well as image analysis can also be used to draft or supplement building information models (BIMs) which are increasingly used in the construction industry. (more)

High-dimensional phenomena are ubiquitous in modern  machine learning, genomics or imaging. These models, based on mathematical and algorithmic analyses, involve tools from asymptotic geometric analysis, random matrices and combinatorics. Large Random Matrix Theory has proved to be a versatile tool to address a number of applied problems in electrical engineering and high-dimensional statistics. In a nutshell, this theory exploits the averaging effect that appears in highdimensional random systems to describe the limiting eigenstructure (spectrum and eigenvectors) of large random matrices. Recent theoretical progress in the analysis of large non-hermitian matrices opens the way to broaden the use of the theory to other fields such as mathematical ecology (feasibility and stability of food webs). (more)

Regarding the area “discrete mathematics and algorithms”, the Labex is currently active around three main topics. A first topic is discrete optimization, with questions ranging from graph coloring to optimization of mobility systems. A second one is the study of limits of combinatorial structures, with a focus on graphon-type objects in discrete geometry and on the use of graphons in statistics. Finally, random discrete structures, especially random polytopes, form the third main topic.

Stochastic and deterministic modeling constitutes an emerging area of research, where significant advances in several fields of application can be expected. Certain new contributions have a significant impact in the areas of banking and insurance, for instance in modeling with jump processes and Malliavin calculus and in the modeling of dependence in multiple dimensions. Another important topic concerns numerical methods for fluid mechanics and materials for biological systems from microscopic to macroscopic scale. In the context of Markovian dynamics, new topics to be developed concern long-time behaviour, metastable dynamics, piecewise deterministic Markov processes and random trees – which all have important applications in physics and biology. (more) 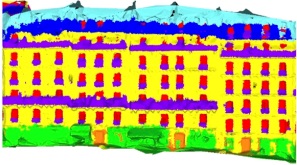 A number of fields of study in the Bézout Labex have natural applications to smart cities. A transversal research axis has been created to group and organize them. Applications includes urban modeling to reconstruct the geometry and semantics of existing cities and buildings (CIM, BIM), digital construction and maintenance with robots and vision systems, architecture and structural mechanics operating on optimal and constructible forms, urban networks taking into account mobility, efficient transport systems mixing transport on demand with more traditional means of transportation, and multifractal analysis of urban data, e.g., to apprehend the human exposure to noise and air pollution in urban areas. These applications require progress in domains such as image and geometry processing, machine learning such as deep learning, differential geometry, large and reconfigurable networks, operations research and multifractal analysis. (more)